The Evolution of Websites

The evolution of websites has featured significant advancements since the creation of the world wide web in 1989. In fact, every few years there are enormous technological changes in the way they look and how we use them. While comparing the look of old websites to websites today can be a fun walk down memory lane, it also sheds a light on how quickly websites can go from ‘on trend’ to outdated. While we hope this blog is interesting, we also hope it highlights how important it is to keep up with the Joneses (and your competitor) by redesigning your website every few years!

Having been created in 1989, the world wide web was just starting out when our timeline begins in 1990. In fact, was 1991 when the first website would be created and today, it is hardly recognizable as it only had a single column of text.

Once websites became more popular, they would make leaps and jumps in appearances. In fact, two noteworthy advancements between 1990 and 2000 include the creation of table-based sites and a new software called Flash. While table-based sites were substantial because they made it possible to create websites with multiple columns, Flash was equally as unique because it gave websites the ability to have videos, music, and graphics with animation. Both advancements significantly changed the appearance of websites as well as promoted better user-experience and content organization.

In the early 2000s, a programming language called CSS (cascading style sheets) became a widely popular way to build websites. At this time, CSS was used in conjunction with HTML which is another popular programming language. While only using HTML mandated creators to code each individual element on a website, the combination of CSS and HTML allowed creators to define elements across a website. Instead of writing out an entire website, creators could write the code for elements once (title sizes, colors, header images, etc.) and have it mimicked across the website.

JavaScript is another programming language that became popular at this time and is useful in a completely different way. In fact, its biggest superpower is that it can add animation to a website that doesn’t need to be read by a secondary program. Up until this time, Flash was pretty much exclusively used to add animation to a website. However, animations built with Flash could only be read with the program Flash Player and not every computer had it.

CSS and JavaScript gave creators more wiggle room and layout capabilities. As a result, the world wide web was seeing more websites using animated buttons and call-to-actions to interact with users as well as websites with uniformity, sleeker layouts, and more organized content.

Websites from 2005: OldCity.com, Nascar.com, and CountryLiving.com.

Although internet access on a mobile phone was available prior to 2010, it was in the years after 2010 that mobile responsive design became a priority for websites. This resulted in progressively minimal websites. For example, instead of getting the attention of users with flashy designs, designers began to focus on layouts that were tall and skinny. This ideology helped the experience on a mobile phone be just as delightful as that on a desktop.

Furthermore, although it can be argued that websites have been optimized for search engines for decades, it wasn’t until the few years before 2010 that creators began to competitively add it to their marketing strategy. As a result, the content of a website became about SEO and therefore, design became about the layout of the content. This only further stressed the importance of a bare-minimum layout. Soon thereafter, more and more websites were redesigned to have reduced navigation of only the main areas of the website, images that shrink on smaller devices, as well as content that gets straight to the point of the website. 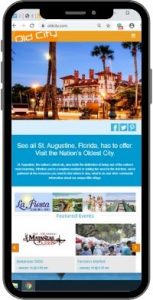 Don’t get left behind, get a redesign!

Websites are changing faster than ever and it’s only a matter of time until newer trends like mobile responsiveness are old news. Additionally, people can tell if your website looks a decade, or even a half a decade old. So, don’t get left behind! Instead, let us give your website a facelift with a redesign. After all, the number of consumers that shop, plan, and research on the internet is only rising.

Press the button below or call us at 904-829-2772 to get started on a redesign that will make your business shine.

Have a redesign in mind?

The mission at Old City Web Services is to navigate the world of web design, web development, and advertising for our clients so that they can focus on what they do best – running their business! Our business intentions go beyond the metrics of graphics, coding, and SEO. Located on Florida’s First Coast, we run a personable home front service and consider our relationship with our clients as a partnership in their success.

Please share and re-post this blog.  Disclaimer: Every effort is made to ensure the accuracy of the information on Old City Web Services Blog.